Is Protein Good or Bad for Insulin Resistance? The Protein and Insulin Conundrum

In recent years, the debate between whether a diet high in fat or carbohydrates is more optimal for people with both type 1 diabetes and type 2 diabetes often doesn’t directly address specifics of protein intake.

Both low-fat and low carbohydrate diets have been shown to cause rapid weight loss, which has some immediate benefits for your insulin sensitivity.

That being said, in the world of diabetes, protein is often considered a preferred source of energy, encouraging people to eat protein-heavy foods at every meal.

And while we heavily recommend avoiding a high-fat, low-carbohydrate diet for many reasons, it’s worth addressing that protein intake is often overlooked when discussing both insulin sensitivity and diabetes.

In this article, we’ll take a look at how your body responds to protein, particularly a high-protein diet.

Then we’ll explore how a high-protein diet can be harmful in the long term, especially if the majority of the protein you eat comes from animal sources.

Insulin Response to Protein vs Carbs When carbohydrates are broken down after you eat them, they are completely digested in your small intestine and then enter your blood predominantly as glucose and fructose.

This in turn causes your blood glucose levels to increase, which in turn elicits the secretion of insulin from the beta cells in your pancreas.

Insulin is essentially a signal to cells to accept available glucose in your blood, which they then absorb and either burn for energy or store for later use.

Protein is digested in your small intestine into individual amino acids, or short amino acid chains called dipeptides and tripeptides.

These amino acids are absorbed into your blood to be circulated to tissues throughout your body. Much like glucose, insulin is a signal that aids in amino acid uptake.

However, there are a few notable aspects of this protein synthesis as it pertains to insulin and diabetes.

Second, a high level of fatty acids (from a high dietary intake of fat), can directly interfere and inhibit protein synthesis. The exact method of action here is still under investigation. The studies are clear that a high-protein diet leads to improved body composition (lower body weight and more skeletal muscle), especially in tandem with resistance exercise.

This happens because after resistance exercise, muscles are searching for increased levels of protein to rebuild and build new muscle.

Since proteins are readily available in a high-protein diet, and are diverted into producing new muscle, a lower portion are eventually turned into glucose or eventually stored as body fat.

Combined with the fact that exercise makes it much easier to keep a caloric deficit, a high protein diet and resistance exercise have promise when it comes to specifically fighting obesity and promoting weight loss.

Weight loss is directly correlated with increased insulin sensitivity for a number of reasons, yielding some immediate, positive results.

However, despite the fact that high-protein may be a quick, effective weight-loss diet, the research shows that other diets are far more effective at reducing insulin resistance. Ultimately, insulin resistance results from the accumulation of excess dietary fat in cells that are not meant to store large quantities of fat. This excess fat (sometimes called a lipid drop) inhibits the insulin action and increases your blood glucose (also known as blood sugar levels).

Producing more insulin will not fix this, especially in diets that are high in meats and fats. Instead, this increased protein consumption simply adds extra steps (like gluconeogenesis) and incites your body to produce more and more insulin, rather than reducing insulin resistance.

In addition, a specific type of amino acids known as “branched-chain amino acids” that are a byproduct of protein have been directly associated with an increased risk for diabetes.

Protein from Meat: The Risks

In addition to potential challenges due to insulin resistance, there are also a wide variety of risks for your cardiovascular and overall health associated with meat consumption.

There are some meats, like fish and organ meats that are less problematic, but many forms of meats (especially processed meats) have recently been classified as Class 1 and 2A carcinogens by the World Health Organization.

Salami, bacon, sausages, and hot dogs were given a group 1 classification by the WHO, which means that there is sufficient scientific evidence that they directly increase your risk for cancer.

Red meats like veal, pork, beef, lamb, horse, goat and lamb, on the other hand, were given a Group 2A classification. This means that the evidence suggests that they probably cause cancer, but further research is needed to understand the exact degree.

Throw in the many high-risk compounds found in meats, like leucine, heme iron, nitrates and nitrites, high sodium, advanced glycation end products (AGEs), and saturated fat, and there are plenty of reasons to be cautious around meat.

To learn more, you can review our article on meat-based diets.

Is Too Much Protein Bad for People with Diabetes? The short answer? Yes. Despite the fact that a diet with high protein content can lead to short-term benefits for your insulin sensitivity, these diets can have very negative long term effects on your insulin levels and other cardiovascular risk factors.

So which diet should you follow to best reverse insulin resistance? Well, despite the popularity of high-fat diets and their positive short-term results, dietary fat intake is the number one cause of insulin resistance, leaving a number of risks associated with diets like keto and paleo.

This leaves one clear answer: a low-fat, plant-based, whole food diet that is high in natural carbohydrates. Though high-carbohydrate meals often get a bad rap due to the high carbohydrate content of junk foods, these meals can have stunning results.

Whether seeking to lower your postprandial glucose levels, cholesterol, weight, or take advantage of a number of other health benefits, this diet has been proven by the evidence to work time and time again.

You can explore our personalized coaching program to learn more. 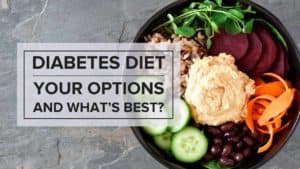 Why Diabetics Should Eat Fruit