Trained as a professional chef, David weighed 240 pounds when his doctor diagnosed him with type 2 diabetes.

His doctor measured his A1c at 9.5% and immediately prescribed both diabetes and cholesterol-lowering medication.

In addition, his doctor told him to “eat a little better” without any indication of what that actually meant.

Since David didn’t think he really felt “sick” at the time of his diagnosis, he just kept eating the same way he always had eaten.

Changing his lifestyle certainly wasn't a priority, and switching to a plant-based diet was absolutely the last thing on his mind.

However, when his doctor told him to start taking insulin, David decided that it was time to begin changing his lifestyle.

Motivated to find an alternative to insulin, he began searching for alternative solutions.

He first found the iThrive docuseries and became inspired to begin making changes to his diet. From there, he discovered Mastering Diabetes and learned how thousands of people reverse insulin resistance using food as medicine.

Within 30 days following the Mastering Diabetes Method, it was clear to David that the program was working.

His HDL and LDL cholesterol are now both 49 mg/dL, and his triglycerides are a remarkable 95 mg/dL. At his most recent doctor's appointment, his A1c was a 5.5%, and David is confident that he can keep it in the non-diabetic range over time.

As a result of his incredible progress, David’s doctor has removed type 2 diabetes from his medical record, and he is now medication free!

David has lost a tremendous amount of body fat and his energy levels have skyrocketed. No longer content to sit at home all day, he has come out of retirement to work part-time.

He now enjoys an active lifestyle riding his bike and working out at the gym.

In addition to fruit, David eats at least 2 pounds of vegetables per day, and as a result he never feels hungry or deprived!

In addition, his entire family has been inspired to join him on this journey and improve their own health as well. 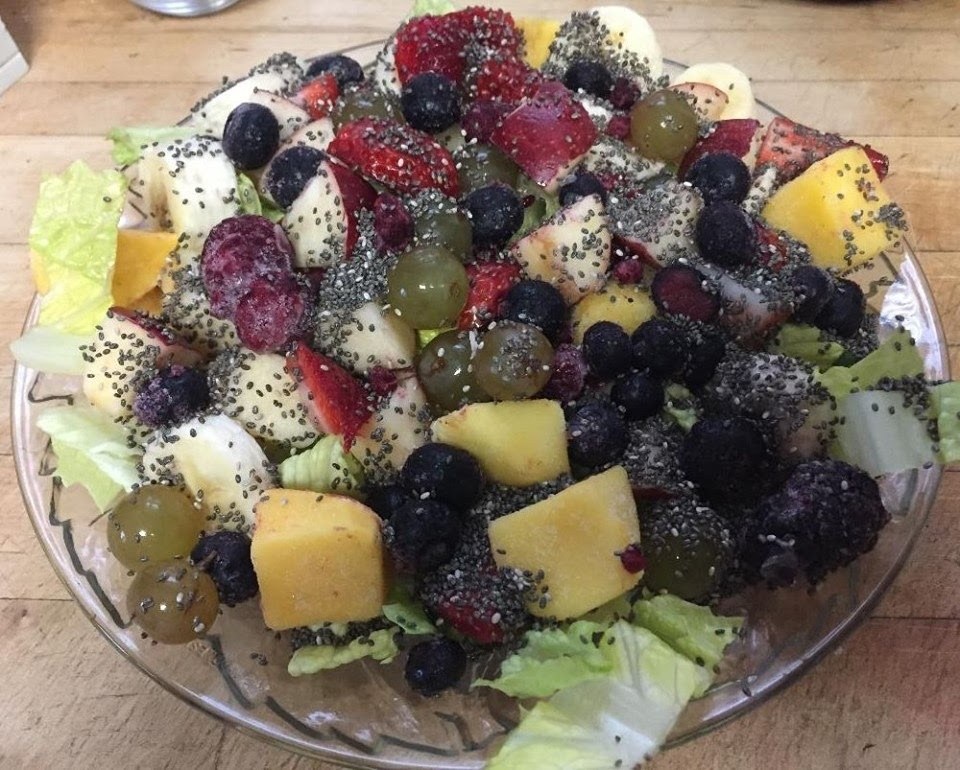 With the rise in popularity of low-carbohydrate and ketogenic diets, many individuals have minimized or even eliminated their fruit intake out of fear that fruit will increase their overall blood glucose levels.

A randomized, controlled, crossover study involving healthy female volunteers measured blood glucose levels after consuming a meal of 50 grams of starch in the form of wheat bread or rye bread, as well as the same amount of bread in addition to pureed berries. Interestingly, blood glucose levels were lower after eating bread with pureed berries than after eating the bread alone.

The bread and berry study was not just an isolated case. A meta-analysis of randomized, controlled feeding studies found that “catalytic” doses of fructose in the form of whole fruits produces a beneficial effect on the body that is much like the opposite of the effects of consuming large doses of fructose in the form of soft drinks and foods sweetened with corn syrup (Sievenpiper, 2012).

This small meta-analysis of six controlled feeding trials in 118 subjects over a median follow-up of 6 weeks showed that ‘catalytic’ doses (22·5–36 grams/day) of fructose in exchange for other carbohydrates may improve glycemic control without adversely affecting other cardiometabolic risk factors.

The reduction in HbA1c of 0.4 % was clinically significant, lying at the lower limit of efficacy expected for oral hypoglycemic agents.

What are the long-term effects of eating lots of fruit among healthy individuals as well as those living with diabetes?

A prospective study of 500,000 Chinese adults ages 30 - 79 tracked each individual’s health over a span of 7 years with blood tests, body measurements, and detailed questionnaires. Among individuals who were free of diabetes (either previously diagnosed or newly detected) at the start of the study, daily consumption of fresh fruit was associated with a 12% lower relative risk of developing diabetes, compared to never or rarely consuming fresh fruit.

In those individuals who already had diabetes prior to the start of the study, consuming fresh fruit more than 3 days a week was associated with the following outcomes (in comparison with those who consumed fruit less than one day per week):

This is just the tip of the iceberg of the many studies that show that eating fruit is beneficial for glycemic control as well as your overall health, both over the short-term as well as over the long-term.

To the best of our knowledge, we have not found any studies demonstrating how increasing fruit intake causes adverse health outcomes.

Let’s congratulate David for taking control over his health, reversing type 2 diabetes, and being an inspiration to his whole family. Like and share this article if you’re feeling inspired by David too!

Cyrus Khambatta, PhD earned a Bachelor of Science in Mechanical Engineering from Stanford University in 2003, then earned a PhD in Nutritional Biochemistry from the University of California at Berkeley in 2012. He is the co-founder of Mastering Diabetes and Amla Green, and is an internationally recognized nutrition and fitness coach who has been living with type 1 diabetes since 2002. He is the co-host of the annual Mastering Diabetes Online Summit, a featured speaker at the Plant-Based Nutrition and Healthcare Conference (PBNHC), the American College of Lifestyle Medicine Conference (ACLM), Plant Stock, the Torrance Memorial Medical Center, and has been featured on NPR, KQED, Forks Over Knives, Healthline, Fast Company, Diet Fiction, and the wildly popular podcasts Plant Proof and Nutrition Rounds. He is a co-author of the upcoming book Mastering Diabetes with Robby Barbaro, MPH.

More Posts that You Will Love...

Diabetes Doctor — How to Find a Plant-Based Physician

The Shocking Truth About “Carbs” and Diabetes – The Rich Roll Podcast

I Eat Almost No Carbs and My Blood Sugar is Still High! Charlotte’s Story

How Kinjal Reversed Type 2 Diabetes Despite a Low C-Peptide